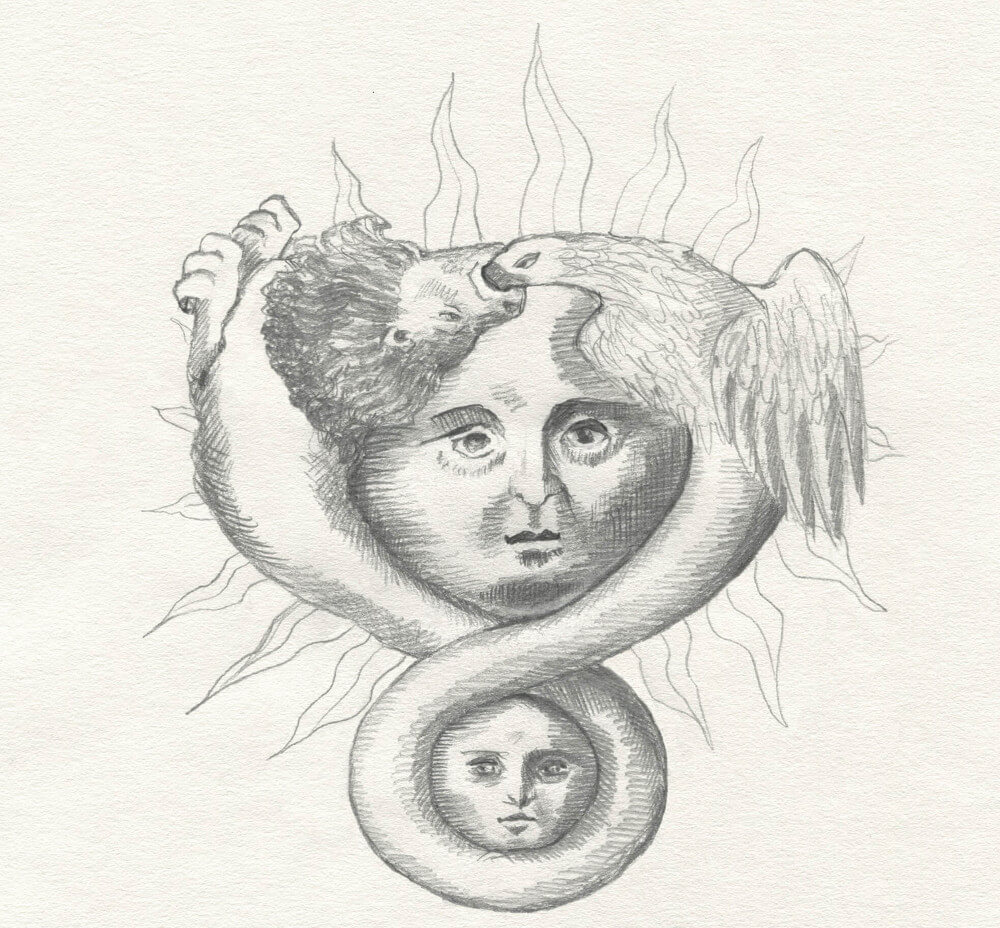 THE CREATIVITY OF THE UNCONSCIOUS

Image of the solitary and the lunatic story, in The Hole and Other Stories by J. Castillo

The psychoanalytic tradition in its origins linked the idea of the unconscious to repression (Freud, S., 1972) and, although it is true that with the different psychoanalytic deficit theories (Bowlby, M., 1964 and Winnicott, 1999) this notion has had to be extended to concepts such as affective failure or deficiency and with contemporary relational theories with so-called relational styles (Mitchell, S. A., 2015) or unconscious organizational principles (Stolorow, R. D., 1988), for that reason the unconscious has ceased to be imbued with a certain halo of dirtiness, conflict and even malignancy.

It is with the emergence of Jungian analytical psychology (Jung, C. G., 2004, von Franz, M. L., 1975 and Jacobi, J., 2019) when the notion of the unconscious, with its archetypal aspect, acquires a new value: its creative potential.

The unconscious and its ability to imagine rites of passage

A 38-year-old woman in analysis told me the following dream:

I’m in a street, looking at shop windows in which there are clothes of very intense and attractive colours, and then beside me a big black car pulls up. A man in a black suit armed with a gun forces me to get into the car. He takes me to a place where there is war, destruction and death. I then see myself in a very comfortable house and I hear my grandmother’s voice saying to me: “You can also learn from this”.

The dreamer had been living a moment of vital upheaval for weeks after she learned of the death of her son’s friend. Her comments had been directed towards the “hammer blow” that she had felt when she realized that death was not far away and the fact that it had touched such a young person made an even greater impression on her. This woman had lived with her back to death, as she had never visited cemeteries, mortuaries or participated in funeral ceremonies.

With regards to the dream, there were no personal associations of any kind. However, for the analyst and connoisseur of the Demeter and Persephone myth it would be difficult not to see the dream as a mythologem, connected with the meanings that this fable could suggest to us.

The myth of Demeter and Persephone

The myth tells us the following:

The story is about the kidnapping of a young, happy and naïve woman, Persephone, the Roman Proserpina. Our protagonist is the daughter of the Olympian god Zeus and Demeter, the goddess of wheat. Persephone grew up with nymphs and in the company of Zeus’s other daughters, Athena and Artemis. Apparently, there were few worries; she enjoyed nature in a state of total innocence. But the plot thickens when her uncle Hades, god of the underworld, falls in love with her. One day when the young lady was fluttering through a meadow, Enna in Sicily, she became captivated by a flower and she went to pick it up, at which point the earth opened up and Hades appeared with his chariot and kidnapped the virgin and took her to the underworld. Persephone cried out and her mother Demeter heard, making her very distressed. From this point, the mother goddess would begin the search for her daughter throughout the known world. Eventually through Helio she found out that her daughter was being imprisoned in the abyss. Zeus’s reluctance to intervene against his brother led Demeter to neglect the earth and in the depth of her despair she caused nothing to grow, and thereby altered the world order, so finally Zeus ordered Hades to return Persephone. But this was not entirely possible as the daughter of the wheat goddess had broken her fast by having eaten a pomegranate seed in her stay in the underworld. It was then that they had to find an appropriate agreement- in the presence of Rea the Great Mother -that would solve the situation: Persephone divided the year between the underworld and her mother’s world. Therefore, with the rebirth of the natural world Zeus’s brother’s consort came back to life, returning to the kingdom of shadows in the sowing season.

The myth, from which we can extract different meanings, can guide us in the interpretation of this dream, in which a young woman, like Persephone, is initiated into death, living its proximity and the connection with anguish, depression and illness that it brings.

The unconscious offers the opportunity to the naive dreamer, who lives among the colourful flowers or shop windows, to construct a rite of passage with suggested material from images that can be connected with a story that tells us of the need for the initiation to death in order to live life with greater depth and integrity. The Hades- gangster becomes the driver of the chariot-car that leads us to the underworld, to the place of war and desolation. And just as the Great Mother Rea certified the commitment to return to life, the grandmother of the dreamer, as the Great Mother, invites the dreamer to learn from it. The unconscious guides this young woman towards the need to approach death and, as Carlos Castaneda said, “make her a counsellor”.

Our modern culture has lost the sense of rites of passage, turning what were ceremonies charged with meaning into simple social acts.  The unconscious can give us, through the creativity of its images, the capacity to construct these rites, giving meaning to the different stages of transition that shape our lives.

The psychoanalyst W. R. Bion described that in order for the capacity of mentalization to develop as such in the human being it is necessary to carry out a conversion process in which the sensory impressions and their emotional expressions, elements that he called β (elements in themselves), that can be converted into what he called elements α (representations that establish relationships and can be transmitted through a narration) (Bion, W. R., 1994). For this process to develop, it is necessary not to have damaged the function α (ability to dream) and to be able to internalize ideograms, mainly in the form of pictograms. So, we could argue that without the function α we could not construct our unconscious, not to mention a boundary between the conscious and the unconscious.

From these theoretical considerations I extract the need to emphasize the importance of dream images in the process of “digestion” of certain emotional experiences and therefore their fundamental role in the capacity to assimilate different contents, making it possible for the dreamer to learn from their own experience. Likewise, without this capacity it would be very difficult to talk about the development of creativity in the human subject.

The work in psychotherapy is of an important complexity, it provides different dimensions and depending on the needs of the analysand, one or the other are prioritized.

With patients who have a structure that allows them to digest the interpretation, either because the differential diagnosis confirms it or because they are in a moment of their process that it is now possible for them to assimilate it, the topographical dimension can be prioritized: making the unconscious conscious.

I want to discuss one of the dimensions of interpretation, which would refer to the revelation of counter-transference. This disclosure can have several formats: to transmit to our analysand what we are feeling; to make them a participant in our associations; and to share with them an image that appears in our fantasy. All these interventions are, without a doubt, aimed at broadening our analysand’s consciousness, and may be modulated by mechanisms such as projective identification.

In the following lines that I am going to write I want to share with you a tool that I use in some clinical sessions, inspired by Winnicott’s squiggle (Gasparino, A. and L. Paz, 2004), which aims to return material to the analysand in the form of an image, which in my opinion would favour the assimilation process.

When I am working in a psychotherapy session and I feel that it is the right time to perform an interpretation and I am not sure the right way to do it, I scribble with my pen trying to follow the vocal rhythm with which my analysand is expressing themselves. After a few seconds I focus my attention on the doodles and see if any figure emerges from them. If I can construct an image of a certain coherence and I feel that its meaning can be a good synthesis of the contents that we are working on, I communicate the image to my patient and analyse the associations that arise from it.

Juana is a woman in her forties who is coming out of a very acute depression. There are contents in her dreams that we relate to her creative capacity and that help her in an important way to take new initiatives in her life. She still has a certain tendency to regression, when she has conflicts with her partner or with another relative it places her in a position of passivity (she remains immobile for hours) and with a very high level of destructiveness (she thinks of the futility of remaining alive).

In one of the sessions, the following figure emerged from my doodles:

Among my associations was the image of the snake devouring the elephant, as we can find in Saint-Exupéry’s story ‘The Little Prince’. My associations led me to think about how my analysand’s complexes were devouring her and placing her in a position of extreme passivity. I transmitted the image to my analysand, an image that she connected directly with her feelings and she also remembered how very recently she had been talking to her son about this story.

Although it is true that the content of her complexes had already been interpreted on numerous occasions, through the image of the devouring snake my patient seemed to assimilate its contents in a more direct way. Perhaps that image, which synthesized a number of interpretations already made, served as an ideogram that could be integrated and later forgotten. My activity with the drawing (stimulated by my unconscious) made it easier for my patient to “dream the clinical session”.

As A. Ferro (2007) points out. the interpretation should not be decoding, but related to a mythical narration, which allows us to construct a scene or a film that gives shape to what is said and creates a warm link between the analyst’s mind and what is interpreted. The patient, starting from a text evoked by the image, began to elaborate new stories that allow her to be more in tune with herself, but that can be perceived closer to her point of origin (archetype in Jung and O in Bion).

Throughout my career as a writer, both of essays and stories, I have felt the need to be accompanied by my unconscious, through images and fantasies that have been emerging when I have been immersed in a creative process. The most vivid example of this has been my latest work, “The Hole and Other Stories” (Castillo, J., 2018). The thirteen stories that make up this book have been inspired by my dream world and my work with active imagination. This creative activity has been a bridge between two worlds; what we understand by the reality of our consciousness and the soul of the unconscious.

In conclusion, I would like to emphasize the importance of creative play, which is as important for our professional practice as psychotherapists as it is for the development of our creative vocation

This site uses Akismet to reduce spam. Learn how your comment data is processed.